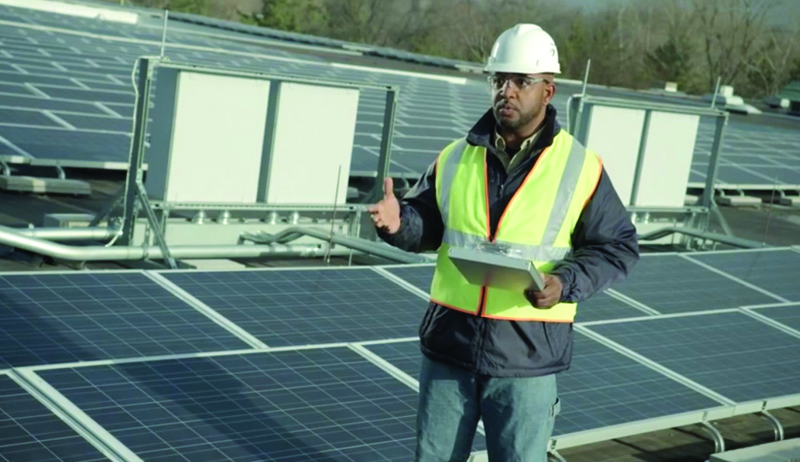 Converting the Sun’s Rays Into Power

Solar energy uses photovoltaic panels to generate electricity by converting the sun’s rays into power. Solar arrays, or groups of panels, are built in areas that offer an unobstructed view of the sky and can produce enough electricity to power hundreds or even thousands of homes.
How Does It Work?
Solar power is generated when the sun’s rays strike a solar panel, freeing electrons inside the panel’s absorbent layer that are then captured and channeled out of the panel, creating an electric current. Panels are made of many individual cells, each generating about one to two watts of power.
Where Is Solar Energy Being Utilized?
DTE Energy is the biggest investor of solar power in Michigan. Currently, we’re building the largest utility-owned solar project east of the Mississippi River.
Since 2008, DTE has spent $67 million developing solar arrays. By utilizing this zero-emissions technology, we help reduce our carbon footprint. By the end of 2016, we will have 31 solar parks in operation, with enough clean energy generation capacity to power more than 14,000 homes.
DTE is currently building two solar parks in Lapeer, Mich. When completed, the combined operations will generate 48 megawatts of energy, creating enough electricity to power 9,000 average-sized homes. The area of these two parks will be more than 15 times larger than any other solar installation in Michigan and will be one of the largest utility-owned solar arrays east of the Mississippi River.

How Does Solar Power Benefit Our Communities?

Renewable Energy
Solar power cuts greenhouse gas emissions by producing power using the sun’s rays, reducing the need for electric generation from other sources
Stronger Economy
DTE’s solar projects have not only become an indispensable part of energy generation, they also stimulate Michigan’s economy by employing workers and providing new taxable revenue. Solar energy is good for both our natural and business environments.
Building and operating solar parks puts people to work. The revenue they generate for landowners who lease their land to DTE goes back into the local economy.

For more information on the use of solar energy throughout the United States, visit the Office of Energy Efficiency & Renewable Energy.