DTE Energy is building the next-generation power infrastructure Michigan needs. In addition to renewable energy sources—such as solar, wind and natural gas–nuclear energy will continue to play an important role in delivering the steady and safe power our businesses and homes depend on every day.

Nuclear energy is a vital asset in the DTE Energy portfolio. In fact, our Fermi 2 facility accounts for 20 percent of the electricity we generate in Michigan, making it a trusted source of energy for businesses and homes.
Holding Down Consumer Energy Costs

Nuclear power is the lowest-cost producer of base-load electricity in the United States today, generating electricity for about 1.7 cents per kilowatt-hour. Fuel costs for Fermi 2 are about half those of the most efficient coal-fired plants. It is also the most reliable, with an average 90 percent capacity factor—the ratio of actual power generated vs. maximum possible.
Boosting State and Local Economies 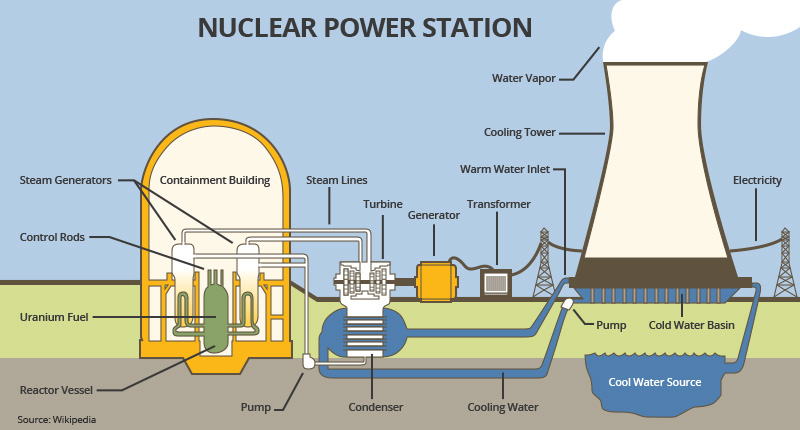 The Fuel
Uranium is a naturally occurring element abundant in the earth’s crust. Mined and extracted from other rock—most commonly uraninite or pitchblende—uranium is then enriched for use as nuclear fuel.
Uranium fuel arrives at Fermi 2 as small ceramic pellets, about the size of a pencil eraser. Each of these powerful pellets can produce the same amount of electricity as 4.5 barrels of oil, 17,000 cubic feet of natural gas or one ton of coal.
Inside the Reactor
Once these non-radioactive pellets have been thoroughly inspected to ensure their safe condition, they are stacked end-to-end in 12-foot long tubes or fuel assemblies. These fuel assemblies are precisely arranged in bundles within the reactor with spaces between for control rods.
The fuel assemblies are surrounded by water. Fission occurs when uranium atoms split, releasing neutrons. These neutrons collide with other atoms, splitting them. The splitting generates intense heat, which converts the water surrounding the fuel assemblies into steam, which is used to spin the turbine to create electricity. The control rods are moved in and out of the reactor between the fuel assemblies to start and stop the fission process.

How is nuclear energy used to generate electricity?
The electricity you use in your home is produced at a power plant, where fuel is used to boil water. The difference between a nuclear power plant and a fossil-fuel power plant is the heat source. Instead of burning coal, oil or gas, nuclear plants produce heat by splitting atoms. This process is called fission. Inside the reactor, pellets of uranium are stacked end-to-end in 12-foot long fuel rods. These rods are precisely arranged in bundles within the reactor with spaces between the bundles for control rods. The control rods can be moved in and out of the reactor to stop and start the fission process.
The heat generated in the fuel rods is transferred to water flowing through the reactor. As the water circulates, it begins to boil and turns into steam. This high-temperature steam travels through large steam lines at high pressure to the turbine. The force of the steam spins the turbine like a high-speed windmill, which spins the rotor of the electric generator.
Nuclear energy does not contribute to global warming.
Nuclear power is the only large-scale source of baseload generation that does not produce greenhouse gases, such as carbon dioxide (CO2) or other controlled air emissions, like nitrogen oxides (NO, NO2 and N2O) or sulfur dioxide (SO2). Taking all 104 U.S. nuclear power plants into consideration, this leads to the reduction of approximately 10,000 tons of NO2 and 32,000 tons of SO2 each year. It is estimated that a single boiling water reactor built to the latest design standard would offset 7.4 million tons of greenhouse gases and 5.1 million tons of coal use each year.
What is radiation?
Radiation is energy in the form of particles or waves. There are many forms of radiation, including acoustic, infrared, radar, microwave, ultraviolet and ionizing. Ionizing radiation is all around us and it is used with nuclear technology in numerous beneficial ways. People living near Fermi 2 receive less than one millirem—a unit of absorbed radiation dose—of exposure a year due to that plant's operation. This compares to the 360 millirem of exposure a person typically receives annually from natural background radiation and other man-made sources.
Why do I see smoke coming out of the stacks?
The clouds rising from the cooling towers are not smoke, but clean water vapor. The cooling towers you see are natural chimneys that use air to cool the water. As the water leaves the cooling towers, it is returned to the reservoir and held there to repeat the cycle. Since the cooling water does not come in contact with the steam from the reactor, the water in the reservoir and cooling towers is not radioactive, but simply filtered lake water.
Where can I find more information on nuclear energy?
In addition to information about DTE Energy’s Fermi 2 plant, information about nuclear energy can be found at the websites listed below.